Bonking can affect the brain… and you may feel anxious, irritable, confused and emotional. What a fabulous quote from Ride 25’s blog.

Get your mind out of the gutter. We are talking about ‘The Wall’ here. That moment when you have depleted your glycogen stores and your mind and body don’t really know what to do with themselves. Now, I don’t think I did any bonking today but I came quite close and I think that I would have done had it not been for Emily actually being prepared and sharing her well chosen snacks with me!

I have two options when considering bonking in New Zealand – preparation and replenishment – refuelling my carbohydrate levels every 90 minutes OR attempting to train my body to burn its fat stores (of which is it reasonably well equipped). In reality, I think that I will be doing a mixture of both. Perhaps tomorrow I can attempt a spin around Richmond Park without having any breakfast first. This shouldn’t be too challenging in terms of logistics as I have no food in the house – standard.

Emily and I met up in Putney and somehow managed to get all of the way to Windsor through a series of parks, tunnels of trees and wildflower meadows. Do we really live in London? All credit to Emily for the route plan, which is below – it is highly recommended! Also, thanks very much for the Jelly Babies and flapjack.

Click on the route to link to my Strava route 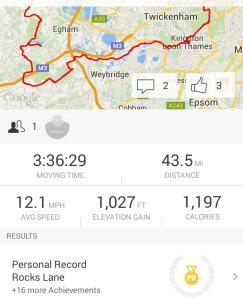 Highlights… We cycled along a road named Gracious Pond Road and whilst we didn’t see any signs of a pond, we both jumped out of our saddles at a brave squirrel and actually managed to giggle a bit during the climbs.

At about 11,  we stopped at a pub in the beautiful village of Burrowhill… too early for a Sunday but a lovely man called David (from the house opposite) filled my water bottle up for me and we chatted a while about our upcoming adventures. He has a nephew living in the Bay of Plenty in New Zealand. I told David about the blog but he was pretty busy with his gardening – what I need is some business cards!

The moment of all moments for me, though, was stopping to take in the view of Windsor Castle from Windsor Great Park. What an incredible treat. I tried to have this captured in an amazing photo but unfortunately you can’t see the screen on my phone in the sunshine and also, random strangers are unpredictable in their photo taking ability.

Not too shabby after cropping but I couldn’t crop out my posture or that lady on the left.

In Windsor town centre, I was able to repay the favour of being prepared by providing the lock by which we secured our bikes. Popping to EAT to recharge our batteries (literally in my case – EAT has a plug socket for every single table but no toilets – modern society), we chatted away and decided that there wasn’t really enough time to get back to London on our bikes for Emily to honour her prior commitments. So we jumped on the next train and parted ways at Putney.

Today I was pushed – I cycled faster over a longer distance than I have ever done before but I made every hill and I kept up for the most part – sure, there were moments where I struggled a little and I had to wait for the descent (where my heavy bike came into its own) to be able to catch up. I never extend myself enough when I ride solo – I need to if I am going to improve.

Also, I really enjoyed the company so if anyone fancies making me the Forrest Gump of cycling in NZ – come and join me!

Maybe I’ll shave my beard, though.

When I got home, I did, however, feel that I could do with a little more of a push – I need to be able to complete challenging 50 mile days, day in and day out for a couple of months. So, I went for a run. Just a short run to collect Bobbie from my school. I really thought that I was going slowly and I wanted to stop and walk so much but I didn’t and guess what? It was an all time PB run. I was gobsmacked.

Cycling Bobbie home felt very strange. A bit like turning up to a house where you used to live and seeing that the front door has been painted. The seat felt incredibly low, which did make me think that the cyclist in Richmond Park who told me that my seat needed to be lowered by a good three inches may have had a point. I mean, three inches lower and my feet would be completely on the ground, so he was wrong in number but I might try half an inch.

Happily, I can also report that the only pain in my derrière is from working hard up those hills – the seat tipping trick has worked miracles! Hooray!

As a final note – I don’t think that it would have mattered where we arrived today. My new mantra for cycling is (German, naturally), Der Weg ist das Ziel – the way is the aim. What a beautiful journey.