Yey! A rest day! Well… I did cycle just over fifty miles today but it really did feel like a rest. Hooray!

What a difference a day makes! Despite staying up late to get a couple of blog posts sorted out, I had a great sleep and woke up feeling refreshed and still hungry! I’m conscious that my phone is stupid and I’m not getting any good pictures, so instead I am going to supplement the beautiful views with random pictures of me in the tent… sorry about that folks! 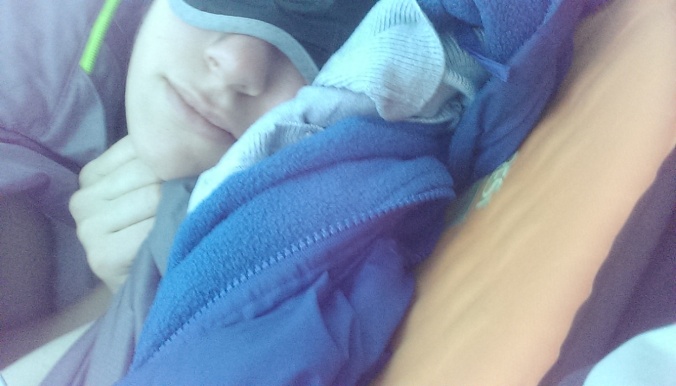 After a leisurely pack up and hurried breakfast of banana sandwich and fudge bar, I hit the road with my fifty mile plan. I’d made it to the beginning of the Sustrans Challenge ride – now it was finally time to begin.

Shockingly, I actually felt good and ready to go. I had worried that I wouldn’t even be able to bend my legs enough to even get on the bike. Maybe the stretching and mini massage actually worked!

The beginning of the route takes you along a very narrow and slightly overgrown bridge, crossing the estuary so that you don’t need to go back up the hill! I actually found this a bit nerve wracking and decided that I would push until I reached a section where wobbling wouldn’t result in a scary plummet. The views out over the River Esk to the sea were vast and a complete contrast to the rolling hills of the previous few rides.

I did have a small moment of unhappiness with the Sustrans crew when I found myself wading through mud on a country lane until I realised that Sustrans are awesome and it was just me being an idiot. This revelation happened when I came to the end of the farm track and the edge of the Esk. Ooops. Fortunately, I was still in such high spirits that I just laughed it off and squelched my way back en route.

Yeah, I got pretty filthy!

Other than this and Garmin constantly trying to send me miles away from Route 72, the rest of the day was complete plain sailing!

I do now have a confession to make. I think I like hills. They hurt and the make me cry but the rewards are dazzling. I have really enjoyed riding by the sea and the weather today made everything so special but the contours of the Lake District make for such dramatic eye candy that I have forgotten all about feeling like I was going to die. Take me back!

The main highlight of the day was meeting Mick very shortly after leaving Mexican Monday behind at Wetherspoons in Whitehaven (it was the only place that looked trustworthy and that’s saying something). He is cycling the entire coastline of the country. It was wonderful to stop and have a chat with him and he recommended the campsite where I am staying tonight, saving me around £8! That’ll pay for the extra portions of dinner, then!

After lunch, the miles were ticking along quickly and peacefully until I ran into a herd of dairy cows on their way for evening milking. I couldn’t get my camera out in time, so I have stolen a picture from the internet. They seemed very thin – I could see all the bones along their backs. Is this normal? With all the recent press coverage of dairy farmers and the raw deal they are getting, it was rather surreal to be so close to the action.

Over to Haltwhistle tomorrow… hope it goes as well! And that I don’t get as sunburnt but the weather is as good… EEEK!

3 thoughts on “And this is just the training ride Part 4 – Ravenglass to Silloth 51.3 miles”