Okay, so mostly I still have no idea but, after my bicycle maintenance course, I am feeling much more confident with Peggy and understanding her needs. This even led me to spend about three hours cleaning her on Tuesday. 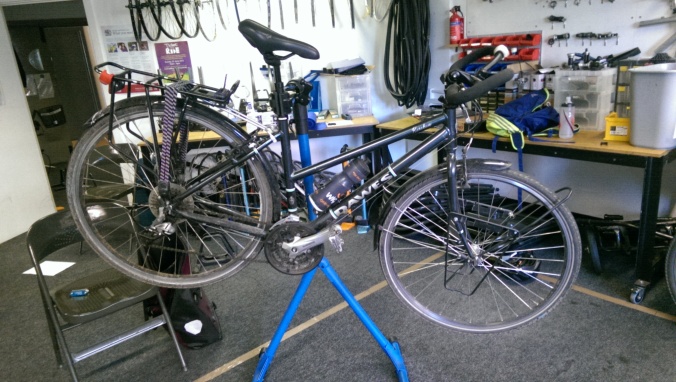 Peggy up on the stand getting some work done by lil’ old me!

I 100% recommend my course by Cycle Training UK. The instructor Paul and his co-pilot Cee-Cee were talented, patient and really dragged us through our paces. Those living in Ealing also get a massive subsidy. By the end of the day, I was absolutely exhausted but super keen to try out everything that I had learned.

Under the supervision of Paul, I replaced my gear cable for my rear derailleur and I suggested that we lengthen the protective housing a little as the cable had developed a permanent kink. I mean, if Peg wants to get kinky, that’s her business but really I don’t think these things should happen so quickly. Paul said that this was a great idea and I enjoyed my verbal pat on the back. YEY!

Things didn’t all go so smoothly and I accidentally started messing with the limit screws (which stop the chain falling off the gears) instead of tightening the tension on the cable (indexing – to make my gear shifts smoother). I realised my mistake straight away and knew that I was being a complete plonker just because I was absolutely exhausted. It would seem that a day of learning is equally as tiring as a day of cycling seventy miles. I really don’t know how the kids do it all week!

On Tuesday, I really got down to business and started a wee overhaul on Peg. It was about time she had some salon treatment. She was FILTHY. I had made every simple/lazy man’s error and it was almost as if Paul had skipped into my mind when he described what we do… We think, ‘Ahhh cleaning the chain will take a long time and I don’t really have that much time, but I know my bike needs some attention, so I will put some lubricant on the chain.’ NO! Do not do this! Do not follow in the path of the masses. The lubricant will help all the dirt to get further inside your chain, weakening the joints and leading to your chain dying a gritty death all too soon. It’s better to be clean than slick. There we have it.

So, with this in mind, I got my degreasant and my rags and all manner of sprays and buckets and got to work. Peg even has her own toothbrush now. Things are progressing to the next level. And I scrubbed and brushed and wiped and rinsed and repeated. Finally, after about three hours work, she looked clean so I went about spraying on my specialist dry lube. AND MORE DIRT CAME OUT!! Where had it been hiding? Every time I tried there just seemed to be more dirt hiding, so I made sure I wiped it off with my rag. I think she will have to do for now but that chain cleaning kit which claims to do my job in 19 seconds seems to me to be a helluva baragin right now.

Peggy is also now the proud owner of four new brake pads, which I managed to fit and balance, applying my new found knowledge from the course. The rear brakes wouldn’t align properly after I had put them on with the spacers in the correct order, so there was a fair bit of faffing. I remembered Paul saying that you should always tighten the spring of the weaker brake arm, rather than loosening the stronger arm. I like this. It makes sense (which so many other things did not – especially barrel adjusters).

Off I trotted to the bike shop again after being inspired by some of my coursemates to think about my water options a little more. With some cunning use of cable ties, I now have three bottle holders! I’m chuffed because this means I can get away without having my Cambak on my back – I will still take it but probably strap it on the pannier rack! Yey!

As a final treat, her newly positioned handlebars (I learned a few nifty bike fitting tips too) were treated to some swishy new zebra style bar tape from Cinelli. WOW! She looks awesome and I love that the wrap goes perfectly with my new cycle computer! I know the guys at the bike shop had tape envy. It has been a week of investing and scrabbling last minute items together in preparation for my mini tour starting at the end of this week. Hopefully it will all be worth it!

All dressed up and ready to go

Put your pedal into its lowest position.

Place your heel onto the pedal and extend your leg until it is almost straight.

This should give you a comfortable seating position.

Place your elbow at the front of your seat with your fingers pointing towards your handlebars.

You can change this distance by adjusting your handlebar position or by sliding your seat on its rails.

Try to ensure that there is a straight line down your arm when grasping for your brakes. Your wrist shouldn’t be bending too much.