On a crowed plane, somewhere over the Pacific Ocean, I am sure it is still Christmas somewhere and I am listening to Mariah’s Merry Christmas – apparently it belongs under the genre of ‘US and Euro Hits’. Who knew? Perhaps it is finally time to reflect on the whirlwind of the past couple of months, the many unwritten blogs and the journey so far, for it is now the end of the beginning. The challenge is here.

Setting off on Christmas Eve, I felt a little sad. I feel as though the preparation for this trip has achieved the goals of the trip itself but I know I am wrong – there is always so much to learn, to conquer, and it is for that that my body is hiding an underlying feeling of nervous excitement. What next?

I have learned already that my body is sometimes weak but that my mind is strong and I can overcome pretty much any challenge with which I am faced. I have learned the kindness of strangers and the true joy when those strangers become friends. I have changed and grown. It shocks me to think that only a few months ago I would not leave the house without makeup and I now wouldn’t dream of even packing mascara for a four month trip abroad. In stark contrast, I don’t believe I had ever bought moisturiser in my life and now I must succumb to regular application – the wind, it burns!

I feel happy, loved and brave. It’s been an incredible year. I guess it is time to put it all to the test! GAHHHHHHHHH!!!!!!!!

It all began really with my hot beverage date with Lizzie Currie, one of the parents from school who is a cyclist, adventurer and fellow northerner. She really is an incredible woman and I have no doubt that she could complete this challenge in a fraction of the time. She’s an inspiration and was an invaluable source of advice. She’ also pretty straight forward and kicked me into gear a bit in terms of generating a packing list.

After deliberating for a few days, I sent off my perfect packing list… she promptly responded, picking out the holes in my well thought out draft – ‘I notice you haven’t included a towel’, ‘obviously I don’t intend to wash, that’s why I’m packing perfume!’ – ooops. So, holes plugged, many with kind donations from the woman herself, I had the detailed plan of every item I would need to take. I stuck to it pretty rigidly actually, with a few various additions (such as a lucky llama and the gorgeous felted penguin decoration I received from one of the kids) thrown in for good measure at the last moment.

The task then began, which included packing up all my belongings and shipping them out to various garages. This began at a fairly late stage, due to my incredible ability to procrastinate. In the final moments, with my room strewn with a ridiculous array of possessions, a friend suggested that I should have created a time lapse video of my efforts. Perhaps. It was a fairly gargantuan task but I fear that any such video would predominantly consist of me lying on my bed in despair of the efforts required and checking my phone for status updates and exciting twitter messages.

STILL. I completed the job and I am on the plane. Some may call this leaving things to the last minute; I like to refer to this as having an exceptional ability to know to within the hour the exact time a task will take in order that I can have as much fun as possible in the meantime. Perfect planning. For any children I teach who are reading this, this is very much a case of do as I say, not as I do. Always complete all tasks as soon as they enter your inbox. Then you can have all the fun without the feeling of impending doom and guilt associated with my method.

Here are some pictures of my progress. 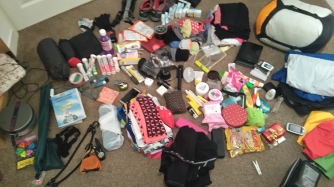 What have you been doing the past few months to prepare?

I know. It has been radio silence on the blog front but that does not mean that I have not been cycling. What have I done?

Richmond Park… Richmond Park saw a lot of me for a few weeks. We became close. I even contemplated cycling clockwise… Well, I DID think about it. This has led to my belief that I probably could join some of the Velosport club rides and I fully intended to do more than one Saturday morning with their beginners’ session but I am afraid that that was never to be. I did make some pretty exciting leaps. I hope to beat Emily’s time up the ‘Big Hill’ on my return. I will probably have to clean Ricci first.

Unfortunately, I’m afraid lost track of 20:20:20 rides. That was a bit of a fail. I must continue to meet new cyclists on my return because it has been such a wonderful part of this adventure to date. Joining a club should help.

I did a spin class. I vowed a long time ago that I would never again enter a spin studio but Lizzie gave me a guest pass to an awesome gym in Acton and I just couldn’t refuse. I worked HARD. It was an HOUR. Who does this for pleasure? I basically climbed a hill for an hour as fast as I could. Don’t expect this to happen in real life. I am still not too proud to push. I then cracked out twenty miles on the WATT bike in an hour, got offered free tickets to Twickenham by a great friend and realised that my cycling was not done for the day. See – I have been working out a bit!

The canal west of central London is not satisfactory ground for a road bike. Ricci hates me. I, however, had a fantastic time. Tim picked me up for the ride, late and on a fixie with toe clips, and we set off through the boroughs of west London on our way to the Chilterns. I had planned the ride there, followed by a 20 mile jaunt through the beautiful countryside just beyond the M25 but alas, due to conditions and time constraints, we got as far as Amersham and decided to get the tube home – after a strategic refuel of course.

Over the summer, Tim had cycled from Milan to London on his beloved bicycle Maev, who was unable to join us that day, and happily gave me tips for my journey which I am sure I will be able to call upon over the next few months. However, I think my favourite part of this ride was laughing uncontrollably as Tim flew downhill, at first matching speed with his fixed pedals and finally giving in and balancing his feet on the crossbar. If I am feeling grim, thinking of this should help.

I’ve rolled backwards and forwards across London more times than I can count… once, Idi Garmin decided to fail again and I was forced to follow my nose, which knew that my destination was basically in a straight line from my current location. I was correct and reached Hackney safely but this did involve the fairly terrifying event of cycling the full length of Oxford Street after dark. Pedestrians do not have a clue. Thank goodness for Christmas lights. It was incredibly beautiful.

Other than this, life has been packed with lots of celebrations of birthdays, upcoming travels and general festivities.

I guess that’s it! I won’t be posting this until I get to New Zealand (IS THIS REALLY REAL? I STILL CAN’T TELL!!) But I think that will be a new post – the beginning, the beginning of the big event. WOWSER.

P.S. Sorry the pictures are a bit pants. I lost my good phone and have a general dislike of the rubbish new one, which has resulted in both a loss of earlier photos and a reduction in the number of photos taken.

P.P.S. Lucy, the epic journey to Heathrow will form the basis of the next blog.