First of all – WE HAVE A NAME! Creating mythical creature costumes all week at school reminded me of this guy: 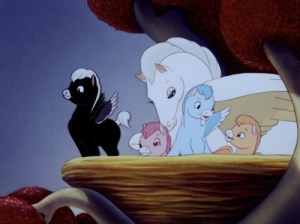 Group cycles have a completely different vibe from solo or even duo rides and I have to say – give me more! The more time I spend in the saddle, the more enchanted I become with the sport. Saturday’s ride and number three of the 20:20:20 challenge saw me unexpectedly taking to the trails around Reading with three others and their (even less appropriate for the terrain) road bikes! 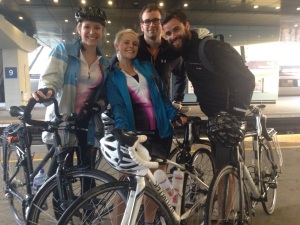 Brian and his friend Peter were kind enough to let me and Lucy gate crash their cycle – Lost Lanes’ Route #18. Though the route was only 30 miles, I managed to learn a lot about my cycling style and had more fun than I have in a long time! 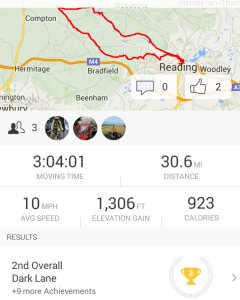 Lucy got a QOM… jealous much?

Heading out from the Station we got a little lost for the first time that day, helped by the fact that there were repair works on the bridge and footpath where we were meant to begin our ride. I also learned that, though I am still petrified by roundabouts, I have more of an idea about how to tackle them on a bike now – I even managed the Hammersmith Gyratory a couple of times without chickening out and pushing.

The next challenge we faced was an obstinate gaggle of geese (NB: just found out that goose is the only noun whose collective term varies based on its state – now I feel cool) which forced the first section of off-roading through piles of excrement. We should have been more careful about what we wished for as we cursed them and joked about it needing to rain to clean the bikes.

The rain became our fifth member just in time to make me too nervous to go full throttle down the first glorious hill. It was so muggy that the downpour was actually a welcome relief and it was so short lived that we actually decided not to stop at the cute country pub at the bottom of the hill. We must have really been into it! We did decide to gobble some Haribo, though. Is there no activity which isn’t made better by Tangfastics?

Shortly after this, the real fun began! The route took us off the gorgeous country roads onto the even more stunning Thames path and other country trails. Despite being a little nervous about our tires, we managed to nail some steep inclines and descend slippery paths without completely cramping our tired hands into brake squeezing claws. 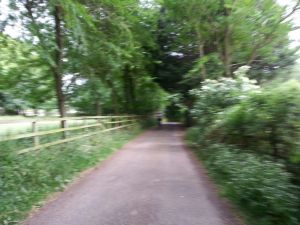 The only greenery shot of the day – we recorded it with our eyes. Not so good for blogging.

We passed fields which rippled and gave the impression of rolling oceans and paused to admire the views and share supplies and jokes. I learned that a banana skin takes two whole years to decompose and promise to take my skins home in future (or at least to the nearest waste receptacle!). You should do the same: http://www.theguardian.com/environment/2009/sep/24/bananas-litter-hikers-mountains-scotland

When Lucy said, “We’re nearly there.” I hadn’t realised that she had meant it quite so literally and we were back in Reading before we even got into our stride. A few road miles might have helped use to raise our bleak Strava averages but considering our downhills became our slowest sections, I think we did okay at a solid 10mph average – in fact that was my usual average not so long back!

Heading for some well deserved sustenance, I slipped out of my clips and not for the first time that day – this is one maintenance task I have been putting off; I am so scared to tighten my cleats for fear that I won’t be able to unclip at a traffic light that I am making my riding more dangerous. It’s about time I manned up and gave those screws a little twist to the right. If I fall off, I’ll be in good company anyway… Pretty sure I am bringing trouble on myself here but it was pretty impressive seeing Lucy set off a domino fall with Brian and later Peter’s amazing standing shocker. My time has almost come, I think. I might even throw one in on purpose just to join the ranks. According to Total Women’s Cycling, it’s a rite of passage. There’s a funny article to link to but it’s half midnight and I can’t find it. So you’ll just have to believe me. 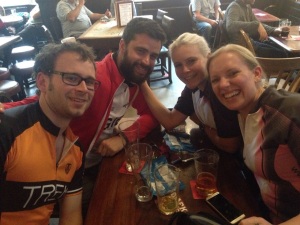 After discovering that Reading’s centre is not a conducive location for a typical cyclist’s lunch, we headed across town to the highest rated gastro-pub in the area to find that it served pies and pies alone with the most antiquated system by which there was a printed list with numbers indicating the quantity of each flavour remaining. When it’s gone it’s gone. At least the pies were delicious. The heavens then opened in full force and we decided to wait it out in the relative comfort of the Nag’s Head. 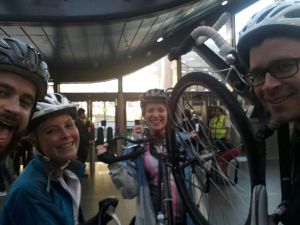 We arrived back at Paddington quite late and I should have been at a Mafia party almost two hours earlier. With regret, I backed out but I think it might have been worth it to stop in Hyde Park and take a short rest whilst listening to Blur sing Park Life. How could this day get any better? With the introduction of the, ‘I have a profession…’ game, which will now permanently feature on my road trip roster of games. 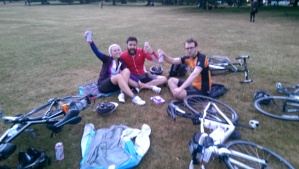 Next stop? Brighton next weekend with hopefully a slightly different route from my solo adventure and fingers crossed a meet up with the guy in charge of UKCyleChat the following day! There’s still so much for me to check out from this ride, from cycle groups online to Trangia camping stoves and £10 sleeping bags…

For now it is way past my bed time, I still have sewing to do and the little squiggly red lines are becoming more frequent. I may also have become slightly addicted to Nashville catch ups whilst sewing. Apologies if any southern drawl has found its way into my writing! G’night y’all. 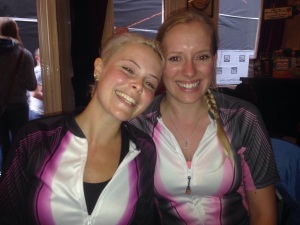 Me and my happy cycle twin