What a manic week! Two late night performances with school, very little sleep and some nice early starts for my cycles. Binge TV, hot bath and lots of carbs later and I am ready to blog about it. Please be warned, some of this week’s pictures are not pretty.

The first fizz of excitement came on Friday afternoon when I sat the children down to explain about my trip and to introduce my competition for them. I was so moved by their reaction – they were so interested and, despite being corralled inside a sweaty classroom, had so many questions to ask. I have tasked them with designing a custom logo for my cycle jersey, which a friend has said he will work his magic on to make suitable for printing.

I showed the kids this and wanted to cry. Why am I doing this?!

This week I also broke £400 on the sponsorship front – that’s now 10p for every single mile I cycle, which I think is great but I would love to try and make it up to £1 a mile! I have been thinking about ways in which I can raise more funds – some crazy training rides perhaps? Or I could try and organise a special event… I will think on this. I need to be able to think of the huge difference what I am doing will make as I face those mountains.

20:20:20 ride number four began on Saturday morning at around 08:15 when I set off to Clapham to meet my new pedal buddies for the day. Though I have cycled to Brighton before, I am definitely claiming this as a new route because a) we started from a different location and b) it turns out that I made lots of ‘alternative choices’ (I’m not going to say wrong turns) in my original journey to the coast.

Heading out of Clapham, we were a four until Carshalton where we picked Sofia up and stopped for the first time. I knew it was going to be excellent when, when offered flapjack and being told just to bite off the top section as the bottom was burned and covered in greaseproof paper, three rounds of, “me please” chimed up. Had I known Sofia has allergies, I would have made this awesome vegan recipe…  As it stood, my offer was hastily cobbled together with a range of substitute items but the top/edible section really was delicious; People even came back for seconds. I’m sure I will perfect them next time…. 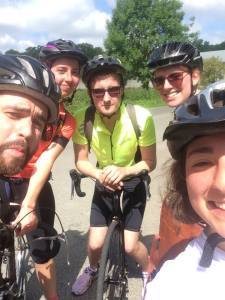 We made it outside of the M25 selfie

Approaching Turner’s Hill, we stopped to refuel big style for the second worst hill of the ride according to the insightful directions. I was feeling pretty confident as I had felt I had nailed this section the last time I had done the ride… which was probably because last time I had gone  a different way and ended up coming the easy way up the hill… oops! This time wasn’t too bad either because I had the thought of Natasha eating half an effervescent energy tablet to keep me going up to the false summit where we crashed and Mark made an unexpected Facetime to his mum! Blog necessitated snaps later and we were on the beautiful descent into Ardingly – hooray!

Those legs need to see a bit more sun.

Disappointingly, I didn’t make a downhill top speed on this ride – a measly 36mph compared to 42mph last time. I did, however, decide that I live for the downhill. It’s just the best feeling in the world and worth every gruelling moment of incline. I did receive a handful of little gold personal best medals for the ride as well, so I can’t complain too much! In fact – yey me!

Having made it up the ‘slow, sapping climb into Hayward’s Heath’, it was clear that we weren’t going to make it to Brighton without a little actual sustenance – sometimes Haribo just isn’t enough. Those of us foolish enough to have thought we could make it grabbed sarnies from a handy convenience store and we set off in search of a picnic spot. The most ridiculous thing is, we found one but sat about 10 metres away from it. There is a gorgeous field next to the Ridgeview Wine Estate which I will definitely make it to next time. Instead we sat on a grass verge opposite someone’s house whilst I pondered the downsides of wearing bib shorts.

At the much needed pit stop (with wash closet facilities), I managed to convince Sofia to give me her pannier for the cycle up the Beacon. This would be great training for me and would give her and her FIVE SPEED bike a bit of a break – what a legend. And, though I did have to stop to get my breath, I got up that monster with the panniers and thirty seconds faster than the previous attempt. Obviously Brian, his one pannier and Tiffin the feather-light roadie were the first to the top (and had quite a lengthy wait) but I am super proud of my achievement! There followed a series of increasingly ridiculous photos. 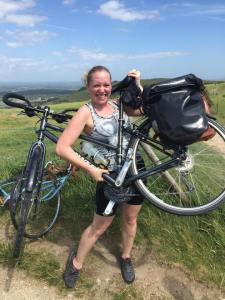 If you’re going to look like an idiot, best do a good job.

And it’s all downhill from here! Except it isn’t. There’s a final push before gliding down to the pier. This was hard, but after the rest at the top of the Beacon, it felt manageable and was definitely a nicer route than the one which I had previously taken. Possibly hardest for the one member of the group who, to coin Brian’s phrase, took the Ditchling name a little too much to heart and ended up toppling into one (a ditch)…

It had been a boiling day and we had pushed hard. There were only three things on our minds at this point – the sea, food and an ice-cold beverage and all were in easy reach. YES!

Not being a strong swimmer, I have to say that I was absolutely terrified by the waves but I was desperate to take to the water and enjoyed paddling and having the occasional moment of total submersion when the enormous swell crashed around me. The sea was warm and it was hard to believe that we were in Britain until some of the less pleasing middle aged sights walked past us….

It was a terrific and challenging day and I was sad to say goodbye to everyone as they made their way back to London and I set off for my trusty south coast hostess with the mostess’ house. I think we all deserve major Kudos for our efforts – Natasha and Sofia for their crazy bikes, Mark on his first spin on a brand new bike and Brian for being chief navigator and nutrition manger. We rocked it.

Stupidly, the only photo I took of cycle number five was of the delicious porridge that Helen made me for breakfast but I can assure you that at ten to nine this morning, I planted myself on Peg again and set off for just over twenty miles along the sea front with Howard, the host of UKCycleChat on Twitter.

Breakfast of champions… and lil’ old me. Thanks Helen and Alex!

It was a lovely, relaxed recovery ride and we managed to chat happily the whole way. We saw a Bernese Mountain Dog within the first five minutes of cycling and, having discovered that he has great taste in dogs, I knew we would have plenty in common. Add the fact that he teaches outdoor education and we were set. I actually felt quite good despite complaining about the hills though I think that Howard thought I was a bit of a pansy; I am sure that almost running a pedestrian over with my lack of turning ability didn’t help my case much!

Yes it says 09:03 but I forgot to set it recording until I got to the lagoon.

He told me about a man who is cycling around the world dressed as superman. A little googling has shown me that he is from Putney. Perhaps there is something in the water in this area which is making us all go mad for cycling. I have to say, I am pretty jealous. This looks like an incredible trip! It is also making me think that a full Galadriel outfit might be required – not just the elf ears. I pretty much want to be this guy.

The route itself was pretty unremarkable as it was difficult to see the sea from the cycle path and lots of areas were built up, busy and industrial. Regardless, I finished the ride feeling as though I couldn’t possibly have completed twenty miles – it had just flown by.

The whole weekend has left me realising that I have a long way to go, both in actual terms when I get to New Zealand but also in preparation terms. There are so many questions which I am as yet unable to answer and, having struggled with two half full panniers, in terms of my physical preparation. 85 miles in two days has left me feeling pretty weary – I need to do 100 days of 40 mile rides to reach my goal in New Zealand. PANIC!!! No… I’ll be fine. Honest. Just sponsor me and everything will be okay.

So, where to next? I think I am free next weekend (other than having to pack for moving house) so I will have to start canvassing for cycle buddy number six, otherwise you’ll see me struggling around Richmond Park repeatedly with bricks in my bags…